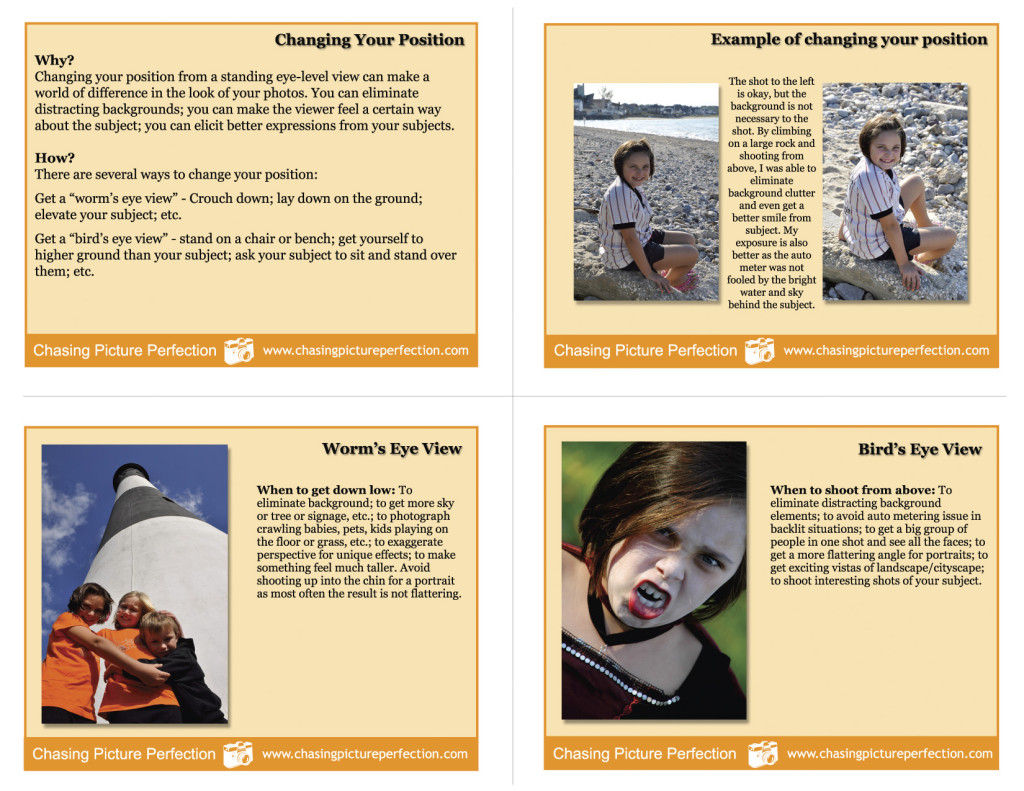 Getting above or below your subject makes your images interesting. Download this card set here and add to set 1 and set 2. Printing it on photo paper is best so it is heavier weight (luster or matte) and add it to a D-ring to clip onto your camera bag. Enjoy! 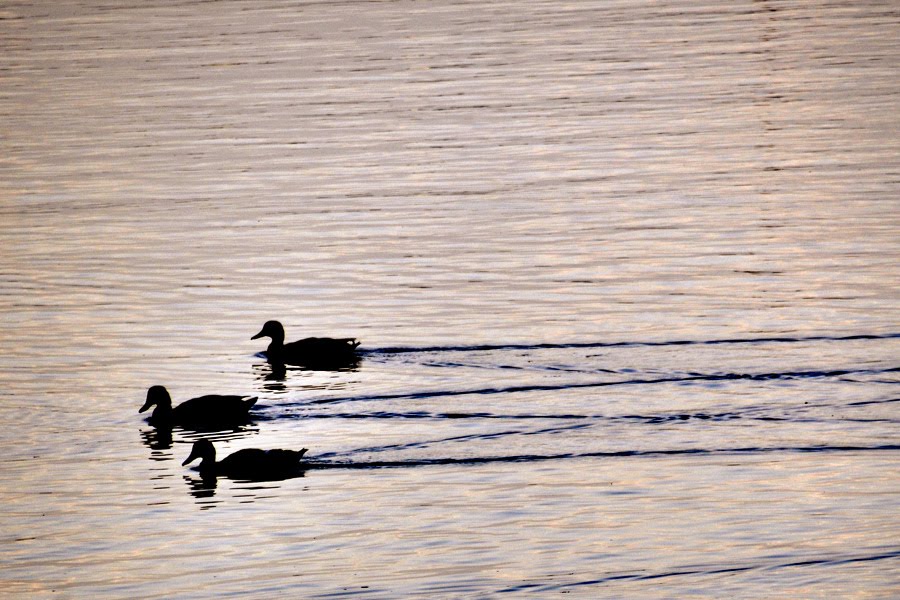 Here’s another quick example of the rule of thirds. I love its simplicity. I called it heading home on my Project 365 blog. The main subjects are located in roughly the lower left third of the grid. Read more about the rule of thirds here, and here. 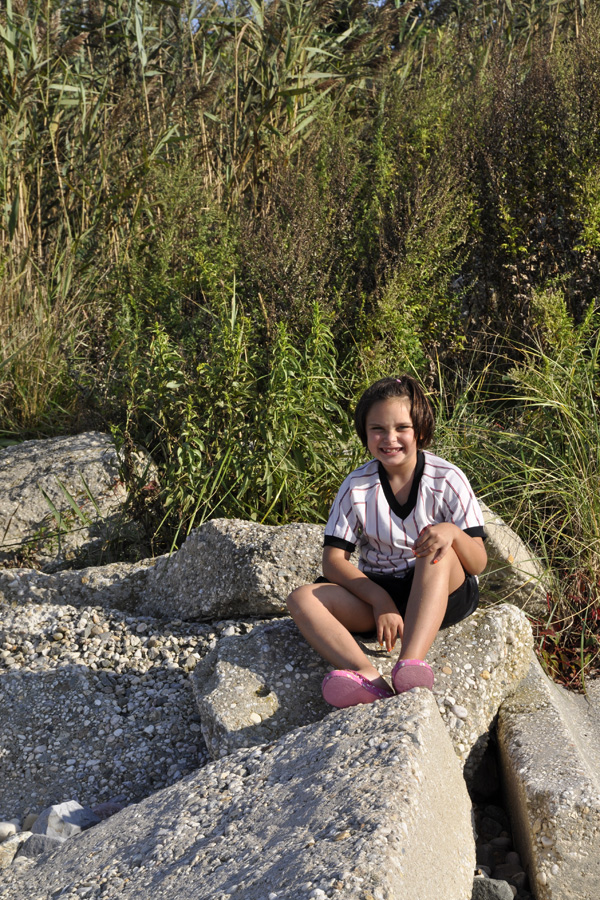 The rule of thirds is one of the most powerful creative options you have when composing your photograph. A photo that has the important element of the photo at an intersecting point of a “tic tac toe” board, or in one of the right or left, top or bottom thirds of the photo, is one that is more compelling  than a shot with the subject centered. 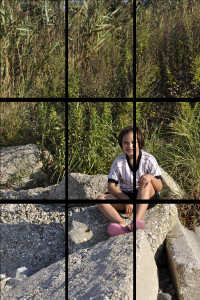 Most often, you don’t want to position your subject smack dab in the center of the frame. It’s boring. Although, this rule, like all rules, can be broken very effectively. That really depends on the shot. But if you start to think about not putting you subject in the center of the frame, you will train your eye to see better shots. For example, the eye closest to the camera should hit one of the intersecting points. Or the critical part of the landscape should be in the top third or bottom third, left third or right third. My shot here shows the subject off to the right slightly and in the lower portion of the frame. This gives the subject breathing room in the frame, the “white space” (which does not have to be white, but rather unimportant or non-distracting space in the frame) gives your eye a place to rest and then come back to the subject, and by positioning the subject as I did, you get a feeling of where she is and that where she is important to me and therefore should be to the viewer as well. Below is another example. This time a vertical landscape that also adheres to the rule of thirds. I added the tic tac toe board to both images also so that you can get a better idea of where the intersecting points or thirds of a frame are. 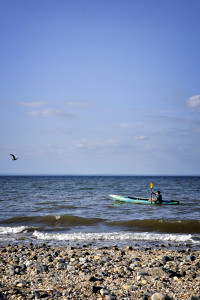 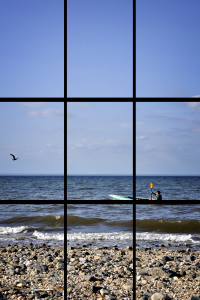 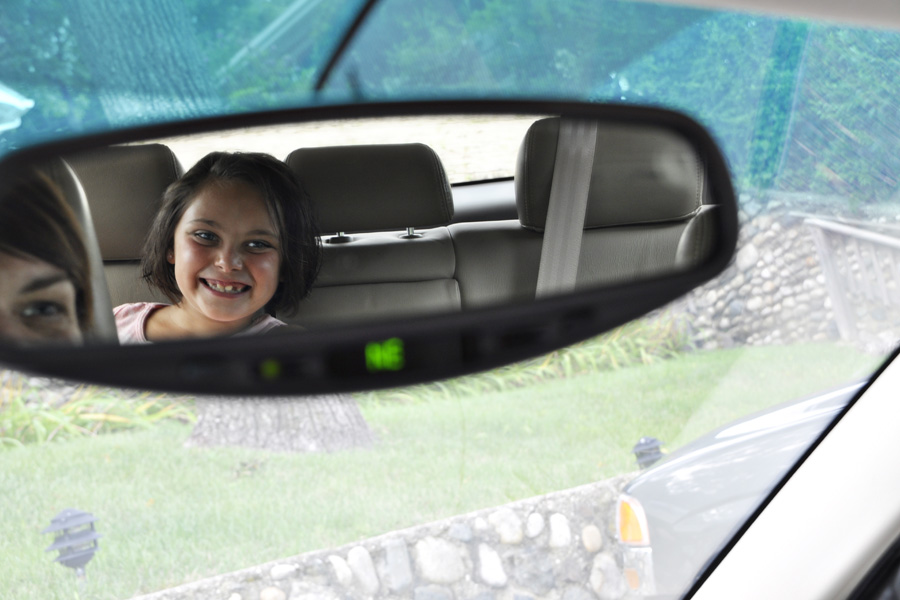 Okay, so this shot was not my idea. I saw it in a magazine scrapbook layout and knew I needed the same shot to capture the moment in time when conversations and quips from the back seat were hilarious, poignant and thought-provoking. There’s nothing wrong with taking a cue from someone else’s photo, as long as it is just for your personal use and you’re not selling it. But, back to the topic at hand. Framing your subject. This photo demonstrates creative framing very well. There are so many ways to frame your subject: literally, like I did to the right here 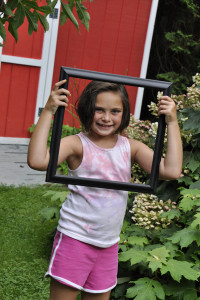 ; or by using your surroundings so that the frame actually enhances the story-telling aspect of your photograph. Like the car’s rear view mirror frame does in the main photo in this post. Look for lines, holes, shadows, trees, archways, doors, bridges, canyons, structures, an alley–all of these and more can be used to give a “frame” of reference for your shot–where is your subject? what is she doing? what’s the emotion? A frame can give a sense of scale. And it guides your eye right to your subject. A frame can take a so so shot and make it brilliant.

Every picture tells a story, right? I believe so. And a good photo makes the viewer see what you want them to see, experience something the same way you experienced it, or feel what you felt. When shooting, try to find those unique angles that tell your unique story. Here, while on my business trip to Malta in June, surrounded by 40 others carrying DSLRs with fabulous Tamron zoom lenses, I had only one photo of myself to prove I went to this place. So on my last day, a long grueling day of on and off the bus sightseeing, one where my shoe selection proved to be all wrong, I sat down on the edge of the harbor area, exhausted, and dipped my feet (covered with band-aids and white from baby powder I hoped would stop the burning) into the oily harbor water. But heck, it was Mediterranean oily harbor water. I took the opportunity to get a real “I was here photo” that tells my story of that day. At the end of a burning hot sunny day. But one I am glad I had the opportunity to experience. (18mm; F/8; 1/1000th sec.; ISO 200) 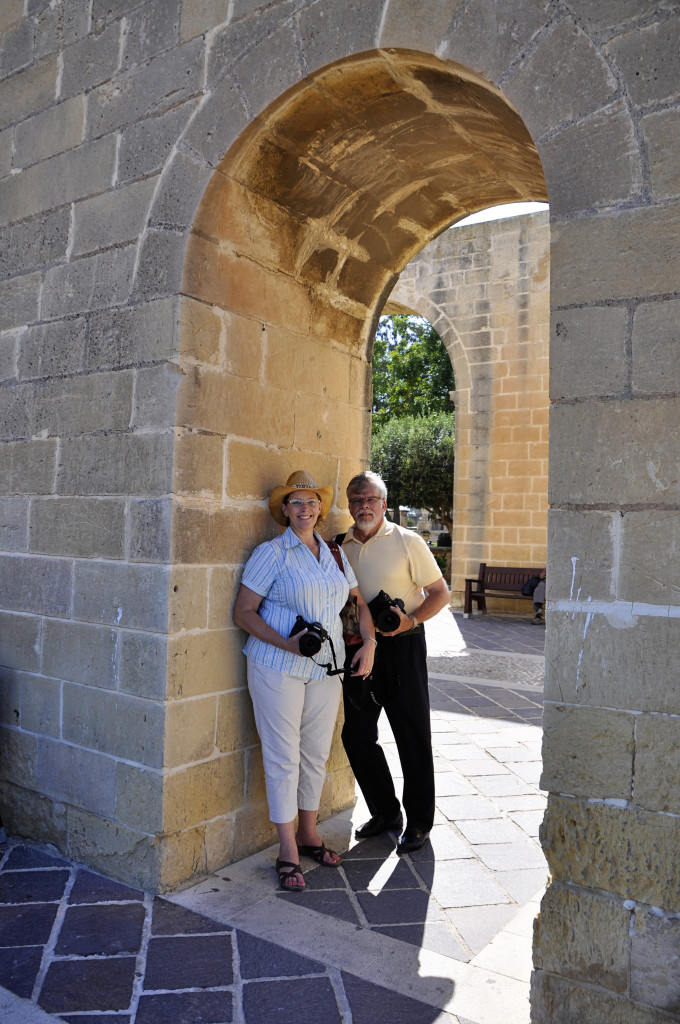 Just edited my 500 photos down to a few (only 72) and picked this shot of my colleagues to demonstrate “framing.” There are natural and manmade frames everywhere you look. Framing your subject focuses the attention on your subject and gives nice balance to a photo. The frame gently guides your eye to what is important. I loved the arch in Valletta, Malta, and asked Bert and Ruth to stand under it. It was late in the day, so the light bounced off one side of the arch and filled their faces with light. Look for frames in the form of tree branches, porches, swing sets, tunnels, tubes and more. The whole set of Malta images are at http://tiny.cc/QWL0H (Tamron 18-270mm; 20mm, F/5.6, 1/800 sec., ISO 200) 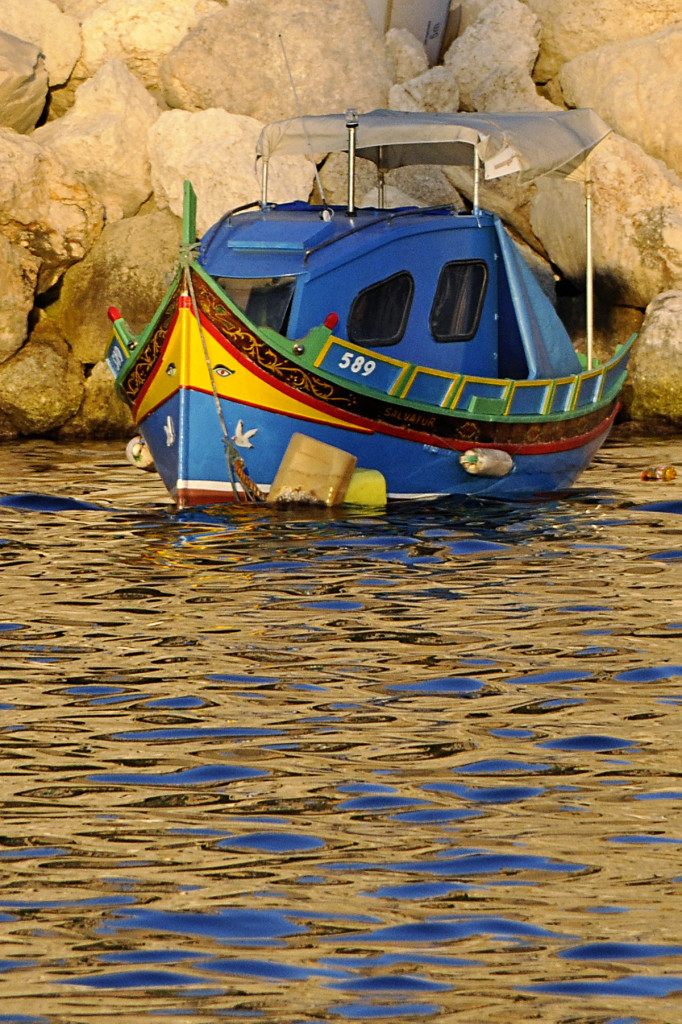 I have three minutes left on my internet token. So a quick “rule of thirds” example from Malta. The colorful Maltese boat is positioned in the upper third, a very straight forward example. With business meetings completed, tomorrow we tour this tiny, over populated island and I hope to have some more composition tips for you. 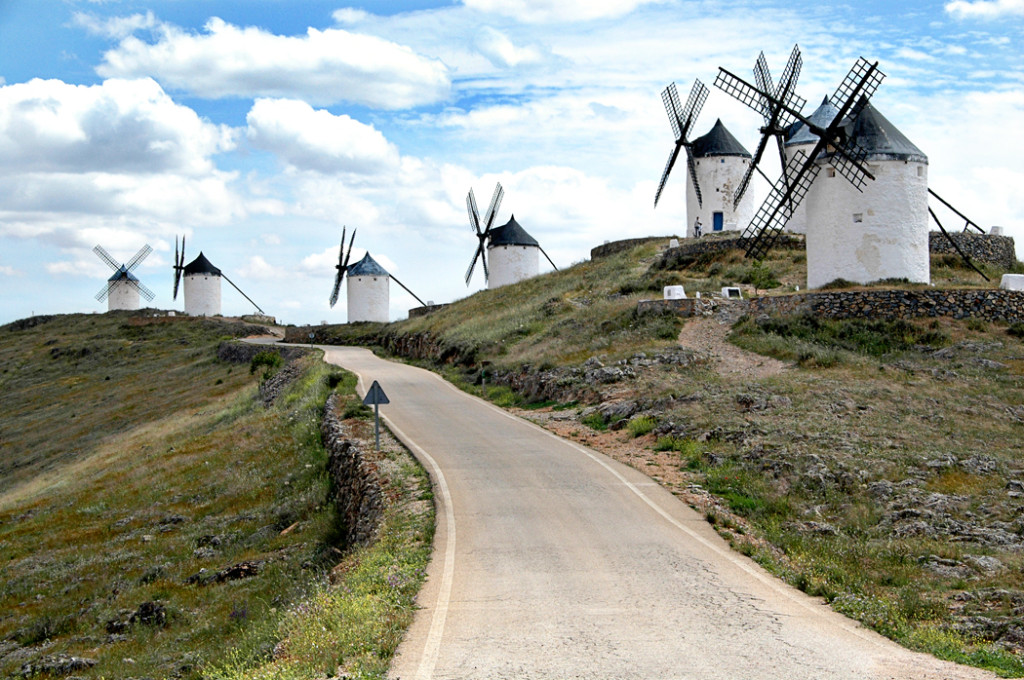 I travel a lot for work and get to sightsee for one day on many of these trips. While I am sometimes sad I am seeing the world without my family (I’ve created a scrapbook page called My Travels Without You), I am grateful for the chance to experience other cultures, food, history and more. Last year I went to Madrid. It’s a year already! I leave for this year’s trip to Malta next week. We visited the sight were Don Quixote “battled” windmills. This shot was one of many from different angles as we walked around the property. It’s one of the few that did not have other tourists in the background, a frequent issue when shooting on vacation. The best tip for that problem is patience! But I post this one for three reasons:

1) I am sure you are sick of seeing so many photos of my built-in model;

2) It’s a good example of the rule of thirds;

3) It’s also an example of leading lines. When taking photos, imagine that there is a tic tac toe board on your screen. Put the main interest of your subject (like eyes, or head, or Disney Castle) at one of the intersecting points, or in the upper or lower third, or the right or left third. This makes a more exciting photo than when the subject is smack in the middle. So always try to offset in some way. But remember, rules are made to be broken and sometimes the middle is the best way for a particular shot, especially if you are trying to create exact symmetry in your image. In this shot, the horizon and the windmills are positioned from middle to the upper third of the image. And the road is a good example of a leading line that guides your eye right to the first windmill and then the windmills themselves guide you right through the rest of the shot.

Look for shots from Malta next week. 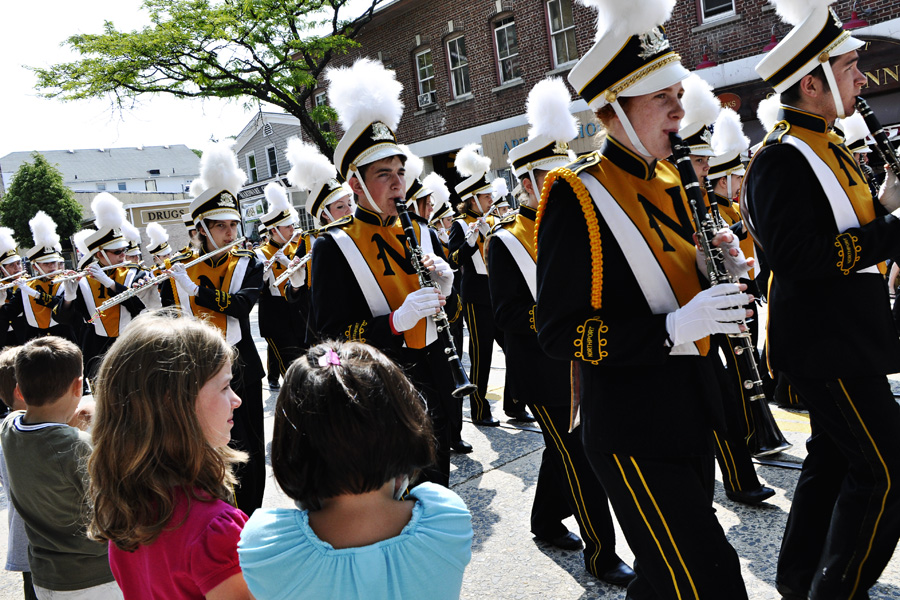 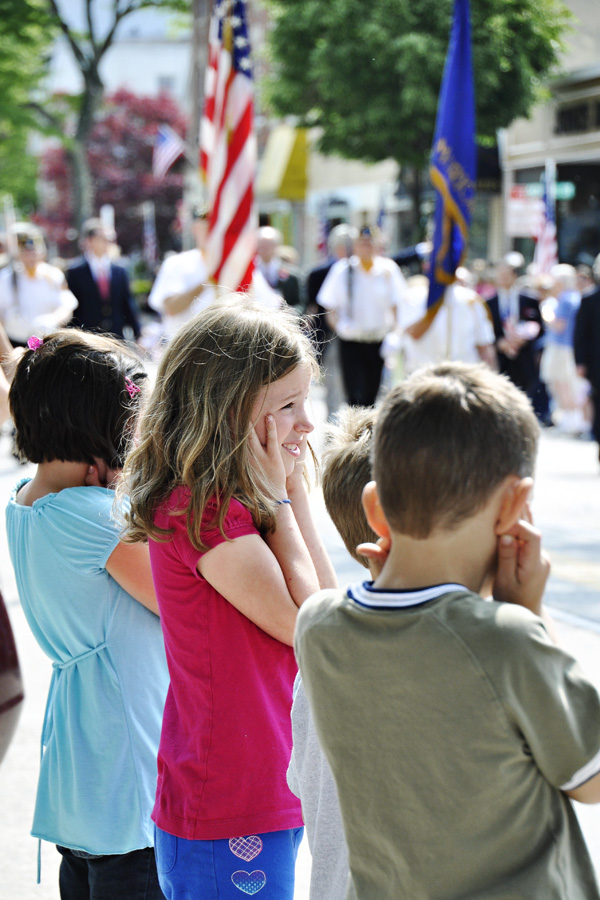 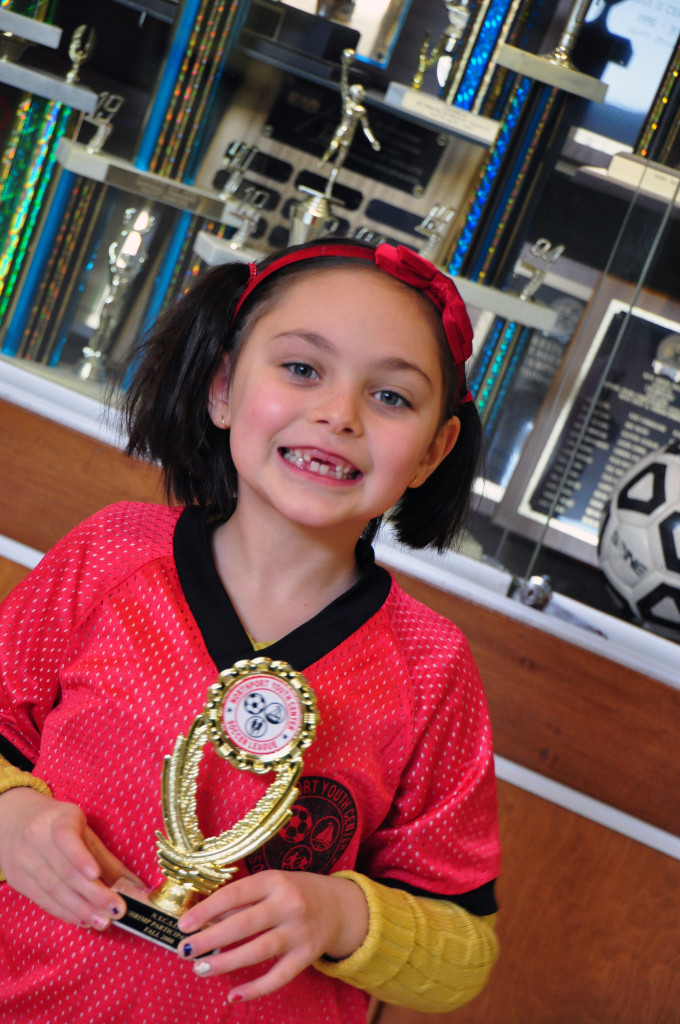 I admit it. I am a tilter. I just love the little feeling you get that this is a moment captured rather than a posed shot (even when it is, like this one after she got her 6th sequential soccer award–well, every player gets one every season, but special to her nonetheless). To me, slightly or moderately tilting the camera gives the picture energy. The other benefit of tilting is that if you, like me, hardly ever hold the camera really straight (making my images sometimes look a bit “off”) no one notices that the image wasn’t straight to begin with. So I just go with my natural tendency to tilt and use it for effect. Now many people feel tilting is over-done. And it can be. And there is certainly a time when it is not appropriate and can ruin an image. But I like it. And I’m sticking with it. For now. (ISO 800; 55mm; F/4.8; no flash; program mode; auto white balance). PS-can you see the catch light in her eyes? It’s coming from an overhead skylight! So look around for a light source when you are figuring out where you want your subject to stand.